Proactol In The Sun, Mirror, Daily Mail and Telegraph 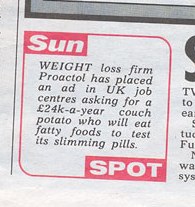 British slimming tablet manufacturer Proactol is being featured in a very interesting experiment by advertising to employ someone to eat as much as they want (up to an extra 400 calories per day) and take the slimming tablet while monitoring their progress over the year.

The job is being advertised in the press as well as Job Centres UK wide.

The successful candidate can stay at home and is encouraged to eat fatty foods while getting nearly £24k per year by way of salary.

One Newspaper, the Daily Mail has described the job as “ideal for for Homer Simpson”

“We are willing to pay you £23,750 a year to continue doing exactly what you do every single day, and all we ask in return is that you eat 16 per cent more calories a week  –  or 400 more calories a day  –  whilst introducing Proactol into your diet”

How Does Proactol Work

Proactol is a completely natural slimming tablet that can prevent up to 30% of fat from food consumed from being digested by your stomach.

The undigested fat can then exit via bowel movements without adding to your daily calorie consumption.

The right person for the job should not be or using any other slimming pill or weight loss product but willing to increase their daily calorie intake by around 400 calories per day.

Ideally eating fast food regularly such as pizza and hamburgers.

The successful applicant will be monitored throughout the year to gauge its success.

This is an incredibly brave move by Proactol because if the experiment is not a success the fact that it failed will create an even bigger news story.

If there is one such product that is likely to succeed in this kind of experiment its Proactol.

Proactol is clinically proven and pretty much does what it says on the tin – successful dieters who participate in the “Best Ways To Lose Weight” yearly poll undertaken by the Telegraph Newspaper voted Proactol as the Best Diet Pill for the last two years.

If you would like to follow the experiment for yourself Proactol are offering an eVoucher code CEBPR1 which entitles a 15% discount on 4 months packages and over.