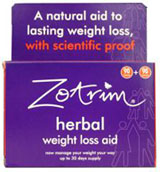 Type diet pills, slimming tablets or weight loss aids into your favourite search engine and the returned results are littered with dozens if not hundreds of comparable products.

The use of littered is an interesting phrase, but highly relevant as there are an awful lot of rubbish products with highly dubious credentials, most originating from the United States.

It is the job of the marketing company to give their commissioned product the greatest appeal – sometimes fact becomes blurred into fiction.

“The biggest criticism that can be laid upon Zotrim is that their marketing attempts to date have not done justice to the product.”

The UK high street is fortunate to have a benchmark, a British institute and health product stockist that is Boots the Chemist

Zotrim has been ever present in store at Boots since its introduction several years ago, as has Lipobind and Adios.

Recently Lipobind and Adios have embarked on huge media campaigns, most likely to combat the threat of two new additions: Appesat, the so called “seaweed” diet pill and most notably Alli – the chemical based fat blocker from pharmaceutical juggernaut GlaxoSmithKline

As the marketing budgets of the big four compete, Zotrim has been pushed away from focus.

Zotrim is the product in the bright purple packaging – adorned simply with Herbal Weight Loss Aid.

The biggest criticism that can be laid upon Zotrim is that their marketing attempts to date have not done justice to the product.

While Lipobind and Adios hint at clinical trials and scientific evidence there is not enough elaboration to convince the skeptical.

It is when the clinical research is scrutinised that Zotrim distances itself from the competition by quite some margin. No fewer that 8 independent documents exist dating back to 2001 with The British Food Journal and Kings College London among the authors.

While Zotrim trails in the marketing battle it has appeared to have won the war. Possibly the biggest enemy to the health and beauty industry is Professor Regan (BBC2’s Diet Clinic), For anyone unacquainted with Professor Regan – imagine the cast of Dragons Den, Watch Dog and Rogue Traders rolled into one human incarnation.  Read More

Recently, she was responsible for “pulling apart the guff that adorns the world’s beauty creams and lotions” – more recently she applied the same technique to the high street diet pill industry.

Suffice to say high street diet pills took a battering – all, bar one. Zotrim came out relatively unscathed and with almost muted approval – high praise from someone so critical.

If you were to walk into Boots the Chemist and head for the diet pill section then pick up a diet pill product and read the packaging – it would appear that there is only one that does what it says on the tin.

Where To Buy Zotrim

Zotrim is only available to buy from the official website It cannot be purchased in store at Boots, Superdrug, Tesco and high street retailers.

Zotrim has special offers and promotions from time to time that enable savings on multiple months purchases.