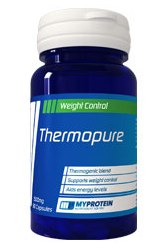 It is new to the UK market but is already starting to make an impression.

Thermopure claims to consist of some of the most “cutting edge” weight loss substances on the market. According to the manufacturers, these ingredients have stood up to rigorous testing and have so far proven to be effective in utilising body fat as a source of energy and increasing the resting metabolic rate.

Green Tea Extract is one of the main components. Green Tea extremely high in Catechin and has been well documented to reduce the amount of fat you digest and store whilst increasing the rate at which body fat is burned for energy.

Another ingredients is the manufacturers own unique proprietary blend that includes: Caffeine, Raspberry Ketones and Cayenne. This compound is targeted towards raising the rest metabolic rate (RMR) during exercise, while burning excess calories.

All fat burners have a tendency to cause a heightened state of alertness. perhaps side effect is to strong a word but to counter the jittery and possible restlessness feelings associated with Caffeine, they have added the amino acid L Theanine to give a more relaxed feeling.

Can be purchased from many third party stockists although rarely seen on the high street in Chemists and pharmacies such as Boots or Holland and Barrett.

Does ThermoPure Work is it Recommended

Early sign are promising although this product does look better suited to the athletic prone rather the casual dieter.

Other Diet Tablets To Consider

The UK market is lucky to have several premium and premier grade commercial diet tablets at its disposal.