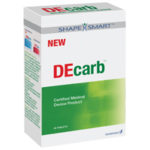 Goldshield have released another weight loss product to co-exist with two other popular products, Lipobind and Appesat.

DECarb is the new carb blocking supplement created to prevent the absorption of a percentage of carbohydrates from food consumed.

The manufacturers claim that DECarb can stop over 60% of excess carbs from adding to your waistline and help to aid your weight loss regime by approximately 2lbs per week.

How Does DECarb Work

The manufacturers strongly suggest that DEcarb is most effective when used together with a sensible and healthy diet and exercise program.

There is an appetite suppressing agent present, although what this is exactly is not fully detailed.

It is a certified Class 2a medical device product that basically means that it causes a physical more than a biochemical reaction on the body, if taken as recommended in the instructions it should not pose a problem to health.

Is DECarb Worth Buying

Relatively new, untried and untested so we can recommend with any conviction.

Dietrine is one of the widely used and successful carb blocker on both sides of the Atlantic. Dietrine uses Phase 2 rather than PhaseLite as its active ingredient.

Dietrine is around £10 cheaper per packet and has a history of usage.